How to get your pro forma online

1. Select "Pay by invoice" at checkout

To get your pro forma invoice, simply add the items you want to your basket, enter your delivery details and select the "Pay by invoice" option at the checkout. 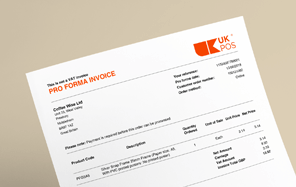 2. Pass the invoice to your accounts team

You can download your pro forma invoice PDF on the confirmation page. We'll also email you a PDF copy along with instructions for making your bank transfer. 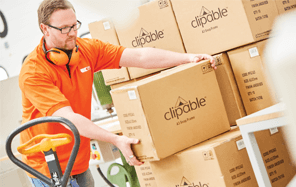 Next Day Delivery when you order by 5pm 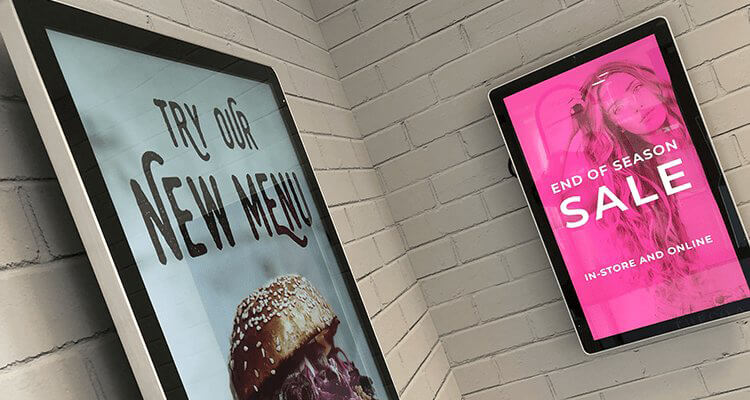 Digital signage vs traditional print: is digital a better investment?

Most retailers know by now that using signage, such as posters and labels, is the quickest and easiest way to convey a message to their customers. The term "silent salesman" is often used to refer to the use of signage in retail, due to its ability to instantly communicate information such as pricing, sizing and composition without the need for an actual human to be present [1].

Posters and signs have been a staple in business for decades. Now, however, many companies are switching over to digital advertising screens, with the industry predicted to gain "USD 31.71 billion by 2025” at an annual growth rate of 8.0% from 2019 to 2025 [2]. But do retailers know what sort of signage they should be using, and why? 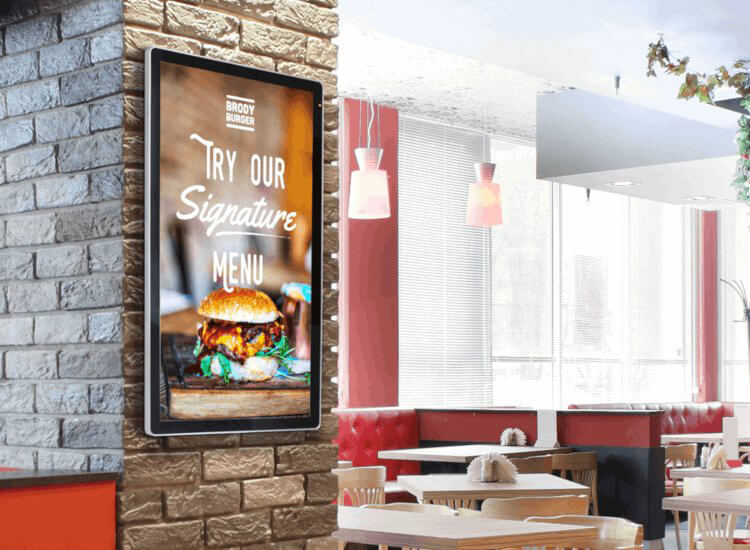 While digital billboards used to be something people would mainly associate with locations such as Times Square in New York or Shinjuku in Tokyo, retailers are quickly wising up to the potential uses of digital signage in all kinds of locations.

When business owners are planning new advertising campaigns, they now have an important decision to make regarding which type of signage to invest in and which is better - printed posters or digital advertising screens.

There is a demand for increased understanding in how consumers respond to different display types, and sensible retailers want to know which advertising format is most effective for their industry.

Why digital advertising is important: practical benefits to business

There are plenty of practical reasons for advertisers to invest in digital signage for retail rather than printed posters and other signs. Digital advertising screens are extremely versatile as they allow users to change their displays instantly, unlike their printed counterparts which require having the designs sent to print, awaiting the printing process and despatch times, and installing the display - every single time a new poster goes up (see Bauer fig. 1 below, depicting how digital signage is able to skip past 3 of the necessary stages involved in creating printed signage) [3].

In the case of companies who wish to keep their signage up to date, they will use and discard a high number of materials in the process, from manufacture, to print, to display. In this regard, digital signage could be considered to be more environmentally friendly as it produces far less waste over its lifespan. Conveniently, this is at less cost to the advertiser as they will no longer have to keep spending on signage production.

But is this enough to create a respectable return on investment (ROI)? In the following sections we will outline exactly how replacing your printed posters with DS (digital signage) could increase customer footfall, spending habits, brand recall rates and more, all of which help to build that all important ROI.

Advertising isn’t just about persuading the customer to buy a specific product. Using digital signage can affect your customer's or visitor's mood and perception of their surroundings.

The use of digital signage as an atmospheric tool to manipulate the retail environment, was found to be highly effective in a 2012 study [4]. This study found that DS had a significant impact on the emotions of shoppers, enhancing their perception of the mall environment and increasing their spending. 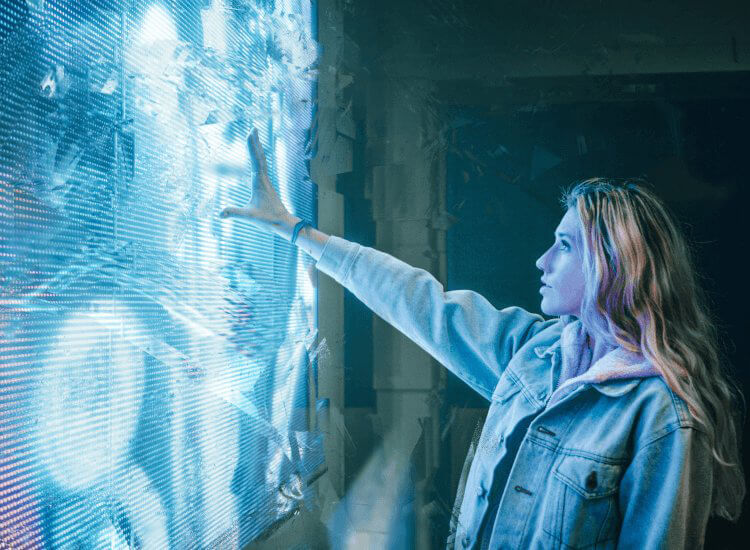 The study also found that footfall traffic increased by 6.1% after the signage was installed. Similarly, a 2015 study by Roggeveen reported a massive 17% sales lift in hypermarkets after the installation of DS [5].

Researchers Garaus et al. studied these effects further and found that using affective digital signage content (content which relates to moods, emotions and attitudes) is able to positively influence a customer’s emotions, which in turn positively impacts approach behaviours and can increase ‘impulse purchases and store loyalty’ [6]. The emotional connection between viewer and signage is discussed further in our "Seeing is shopping" section in Part Two of this article, which gives tips on what you ought to display on your digital signs.

The take-home message from these studies is that DS can be used to influence the mood of customers which, in turn, can strengthen their interaction and satisfaction with a retail environment. See our flow chart below for a more visual explanation of the process. 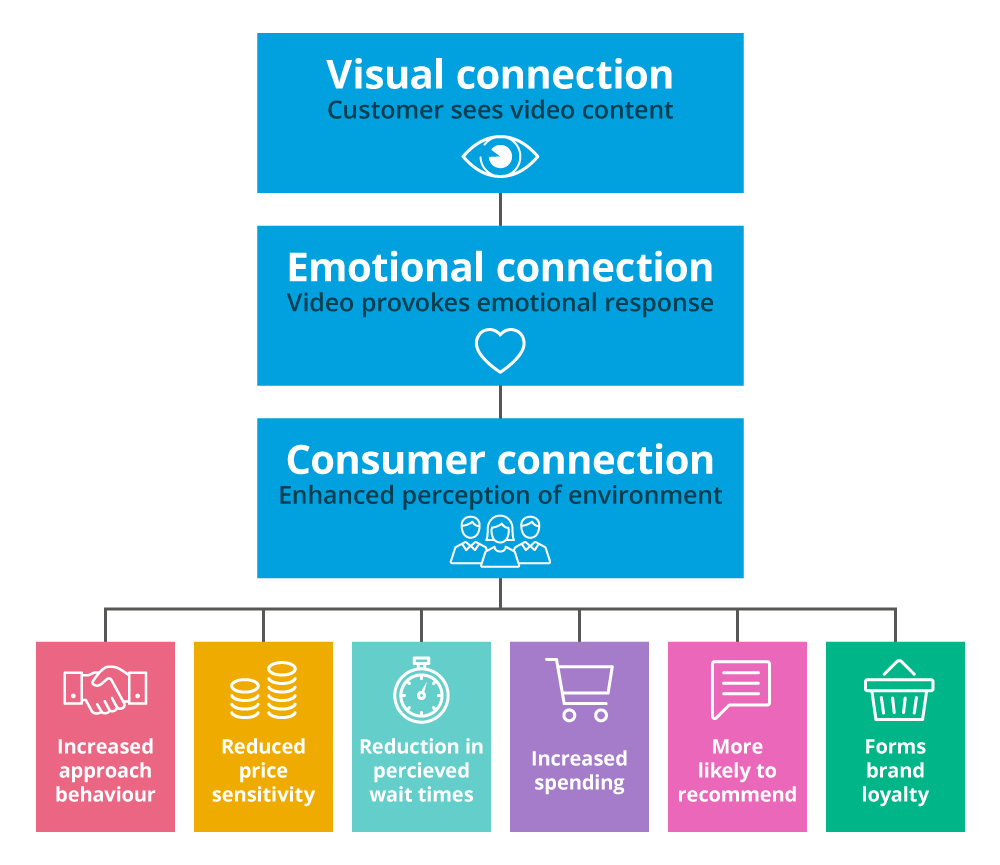 The effect known as "display blindness" describes how, when a person is overwhelmed by posters and signs, their brain dissociates and they will no longer retain any of the information they are seeing. J Muller explained how this is an effect produced by the brain, saying "attention is highly selective" [7].

This reinforces the previous suggestion that advertisers may wish to invest in digital advertising supplies in order to effectively capture customer attention. 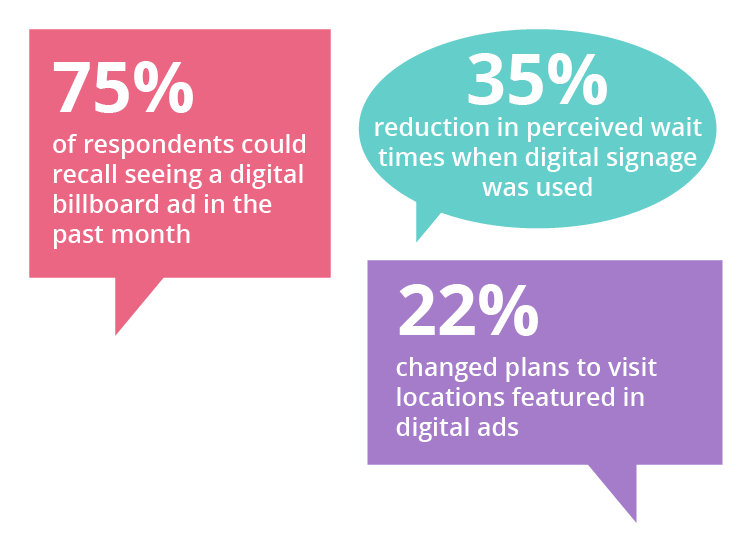 In their 2016 study into digital signage and advertising, Bauer et al. found that using attractive digital displays, such as colourful images or video, helps to eliminate the display blindness effect caused by other forms of signage and results in more customer attention than traditional printed signs. Furthermore, interactive touchscreen based DS gives a better user experience by involving the audience.

Bauer also demonstrated that digital signage displayed ‘at eye level or positioned considerably above the head [will] draw more attention’ than lower down displays and video content will ‘capture the eye longer than text’.

Therefore, wall mounted DS used for displaying promotional messaging can be effective at grabbing attention when they are placed high up with moving images.

There are limitations to this approach, however. Using DS incorrectly runs the risk of overwhelming customers with too much signage which will bring them back around to display blindness. This drawback can be mediated by placing your digital signs in appropriate locations and catering content to your market.

As we have mentioned, interactive digital signage has even better potential for gaining attention and being recalled. Keeping customers involved in the experience is the new big priority for brick-and-mortar businesses, and the technology used is constantly advancing. 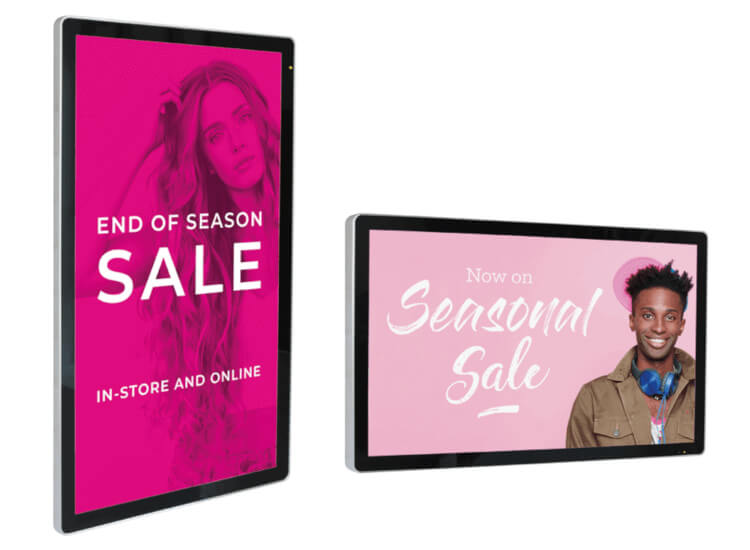 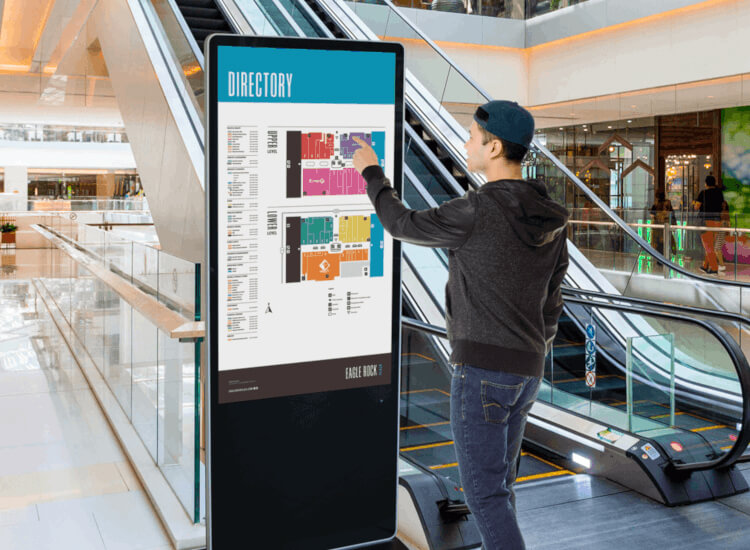 Touchscreen kiosks can entertain and inform customers inside shops and in public spaces and are becoming highly popular for displaying menus, wayfinding and product selection.

Some shops are now bridging the gap between e-commerce and brick and mortar by treating their high street shops as a showroom, and allowing customers to order online in store using digital touchscreen kiosks.

Other businesses are taking interactivity to a whole other level, with some using motion and depth sensor technology such as Microsoft Kinect which enables interactive displays to engage with passersby in a huge variety of ways. This is developing into a unique field of marketing which is often called an Augmented Reality campaign, but can also be referred to as a form of experiential marketing.

The pet food company Purina uses innovative ways to engage new customers using digital displays. In 2012 they created an interactive digital window display which encouraged passersby to play with virtual dogs on screen. The digitally displayed canines would respond to movement, using skeletal tracking technology as a promotion for their dog food Beneful.

In 2018, to promote their Felix cat food range, they had their beloved cartoon mascot cat displayed on a digital screen in prominent public locations. The screen reflected the public below, showing the cartoon feline mischievously interacting with passersby and other ads.

In 2019, they revealed an ambitious campaign to promote their ProPlan, using what they call Street-Vet. This involves a digital kiosk providing customised health information to dog walkers - when their dogs urinate on the sign pole. These creative campaigns appear to have been very successful in engaging new customers with memorable interactive experiences, resulting in millions of people talking about them online.

Marketing campaigns such as those developed by Purina have given us some fantastic interactive signage examples, showing why digital advertising is important and how it can eliminate display blindness and engage customers in imaginative new ways. Smaller businesses, however, may need to think inventively about how they can replicate these effects on a smaller scale and budget.

Digital signage vs printed posters: which is most effective?

To conclude, traditional print media is certainly not dead yet, and posters are still the most reliable form of signage for smaller businesses. Digital signs, however, have now proven their value for engaging customers, as well as increasing footfall and sales. Nonetheless, in our current society in which we are forced to consume hundreds if not thousands of printed and digital messages per day, display blindness is on the up and retailers must make more innovative advertising choices in order to gain attention.

Both digital and printed signage have their strengths and weaknesses, and the best type for purpose depends on what type of retailer you are. Whatever form of POS advertising you use, make sure that you carefully consider your business type, display style and target market, to ensure that you are achieving the best results and ROI.

Check out the second part to this article, How to create digital signage content, for more information on how digital advertising works and what to display on your digital signs to in order to get the biggest return on investment. 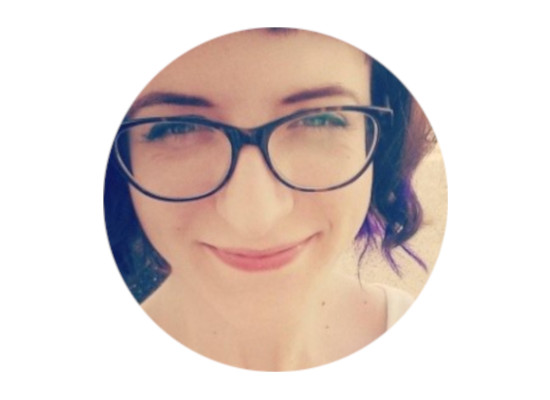 Kira Swales is a copywriter for UK POS. Kira has extensive experience in e-commerce and copywriting, and has spent many years working in retail. She enjoys researching topics in depth in order to provide readers with the latest information on point of sale and merchandising. Read more of her in-depth guides on POS in our Knowledge Hub.